There are five winners in four categories of Vanguard Awards. The winners are:

Vanguard Award for Major Rehabilitation of a Non-Housing Structure into Affordable Rental Housing:

Vanguard Award for Major Rehabilitation of a Historic Structure into Affordable Rental Housing: 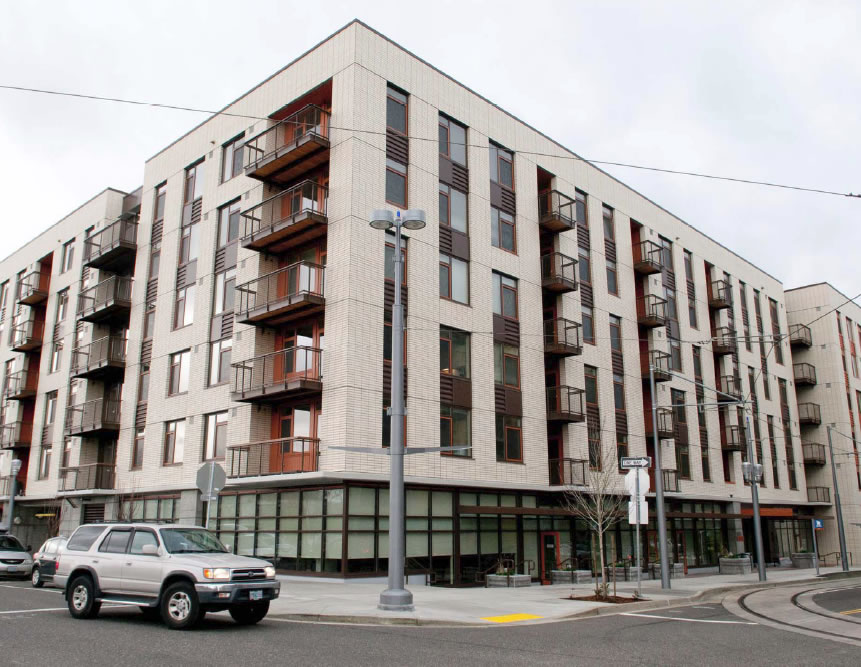 Gray’s Landing was named after esteemed Oregon developer and philanthropist John Gray. It is the first affordable housing development in Portland’s emerging South Waterfront neighborhood – a former industrial area just south of downtown. Situated on the street car line in a walkable neighborhood, its transit-oriented location is ideal for residents, providing convenient access to jobs, health care, shopping, restaurants, and other amenities. The ground floor includes the new headquarters for REACH Community Development. The City of Portland spearheaded the project by providing the land and significant tax increment financing. REACH used 4% LIHTCs, tax exempt bonds, Oregon Affordable Housing Tax Credits, and various other grants to complete the financing. Construction began in April 2011 and was completed in November 2012, on time and on budget. Gray’s Landing achieved a LEED for Homes Mid-Rise Platinum certification for its innovative design, including the largest eco roof in the City of Portland. Move-ins were completed at the end of March 2013. Gray’s Landing provides innovative services to residents that focus on economic stability, budgeting, workforce training, access to emergency food and supplies, and access to service agencies. Forty-two of the 209 units are reserved for formerly homeless veterans. Project-based Section 8 vouchers were provided by Home Forward for these units and REACH partnered with the U.S. Department of Veterans Affairs to include a half-time VA case worker with office hours in the building. Gray’s Landing fits well into the fabric of this community, both aesthetically and with its infusion of diversity to the neighborhood. The building has added 50 new jobs and increased pedestrian activity in the neighborhood. 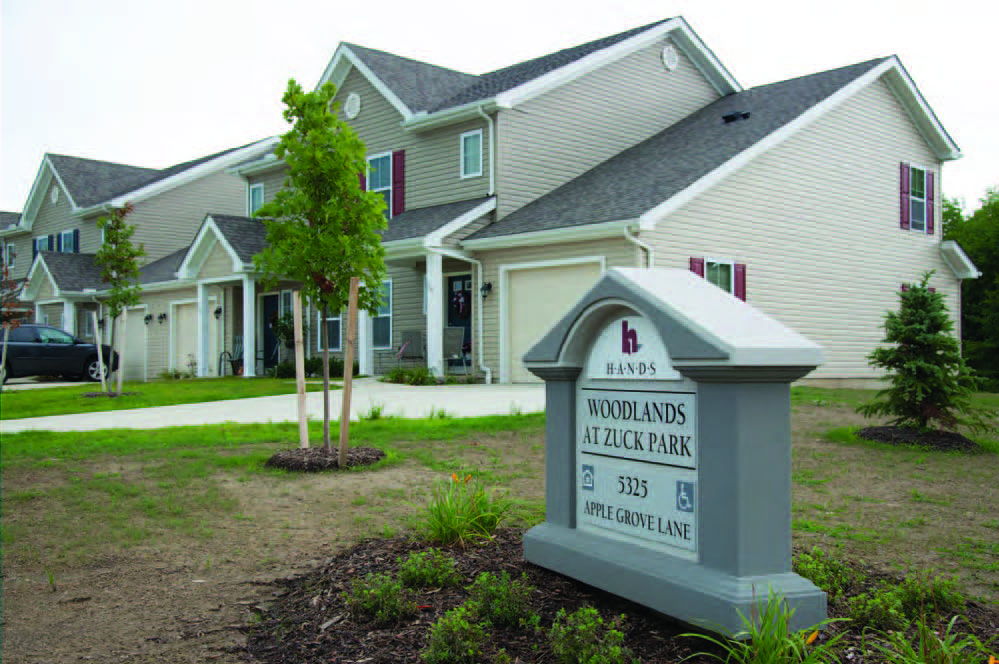 Woodlands at Zuck Park was developed in response to the need identified by Millcreek Township in Erie County, Penn., for at least 29 affordable housing units and 50 senior housing units. HANDS began to effectively fill this void with the development of both the Ridgebury Apartments, a 40-unit senior affordable housing community completed in 2011, and the Woodlands at Zuck Park, completed in June 2012. HANDS had to overcome some neighborhood opposition to the development, which it did through public meetings and by offering a tour of a similar project. Financing included $7.2 million in LIHTCs, a $2.1 million loan from the Pennsylvania Housing Finance Agency, $20,000 in Community Development Block Grant (CDBG) funds, and construction financing from ERIEBANK. The development was completed on time and within budget. The Woodlands consists of 30 three- and four-bedroom townhomes situated on a 6.8 acre site. HANDS employed best practices in storm water management by designing and building state-of-the-art underground storage and drainage chambers. The site is in close proximity to most Millcreek Township and Erie shopping, employment, recreation, entertainment, social services and educational opportunities. The Millcreek Township School District is highly rated, and the development includes green space, a tot-lot, and a community center equipped with meeting space, management offices, laundry facilities, and a business center with computers and Internet access. The property manager and social service coordinator actively work to identify resources that benefit resident families and coordinate resources for them from numerous local agencies.

The Towers of Kuhio Park 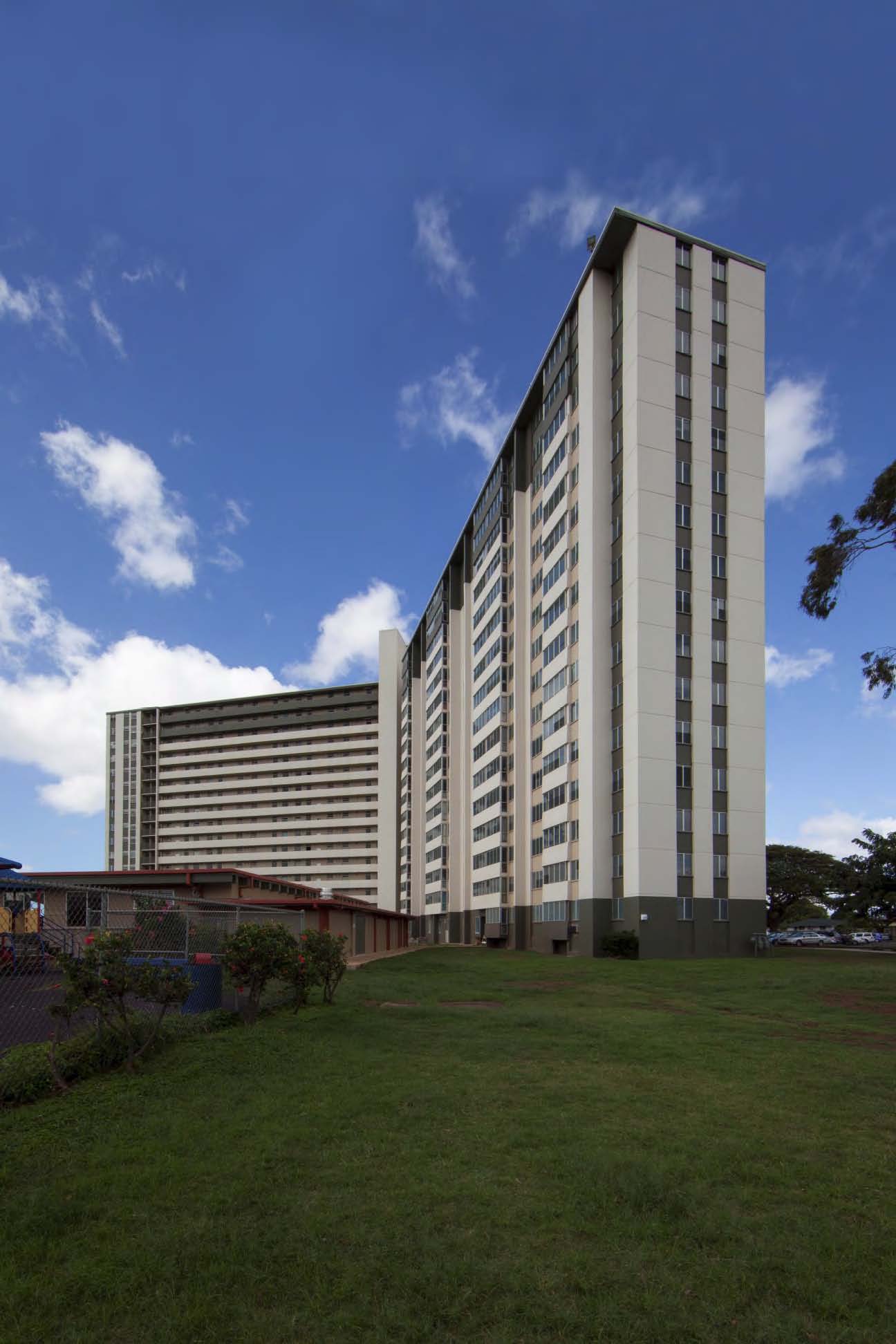 The Towers of Kuhio Park was formerly known as a place of blight, crime and isolation. Built in 1965, the physical condition of The Towers reflected 45 years of deferred maintenance. Revitalizing The Towers was urgent and essential considering Honolulu’s extremely high cost of housing. The Hawaii Public Housing Authority (HPHA) selected The Michaels Development Company and Vitus Group as their private-sector partners to preserve this valuable 555-unit affordable housing resource. The $135 million renovation of The Towers marked the State’s first public-private partnership to transform public housing. Ninety-six percent of residents were able to remain on-site during the renovation. The ground floor was reconfigured to accommodate new technology centers, hospitality suites, expansion of the existing medical clinic, and larger laundry facilities in each of the Towers. A new fitness center and 12,000 sq. ft. of ground floor space was converted into 11 social services rooms where a myriad of programs are now offered. More than $54 million in physical improvements, amounting to approximately $97,000 a unit, have been completed. Sustainable strategies and green building techniques and materials have all contributed to a significant reduction in energy costs. The Towers’ original concrete facades have been repaired and painted in a vibrant, tri-color decorative scheme to deemphasize the scale of the towers.The Towers at Kuhio Park illustrates how revitalization of a troubled public housing development can be achieved with minimal state and federal capital funding. Financing included tax-exempt bonds, tax credits, short-term bonds, and private equity. A recent appraisal established the value of land and improvements at just under $50 million. The renovation of the units was completed six months ahead of schedule. 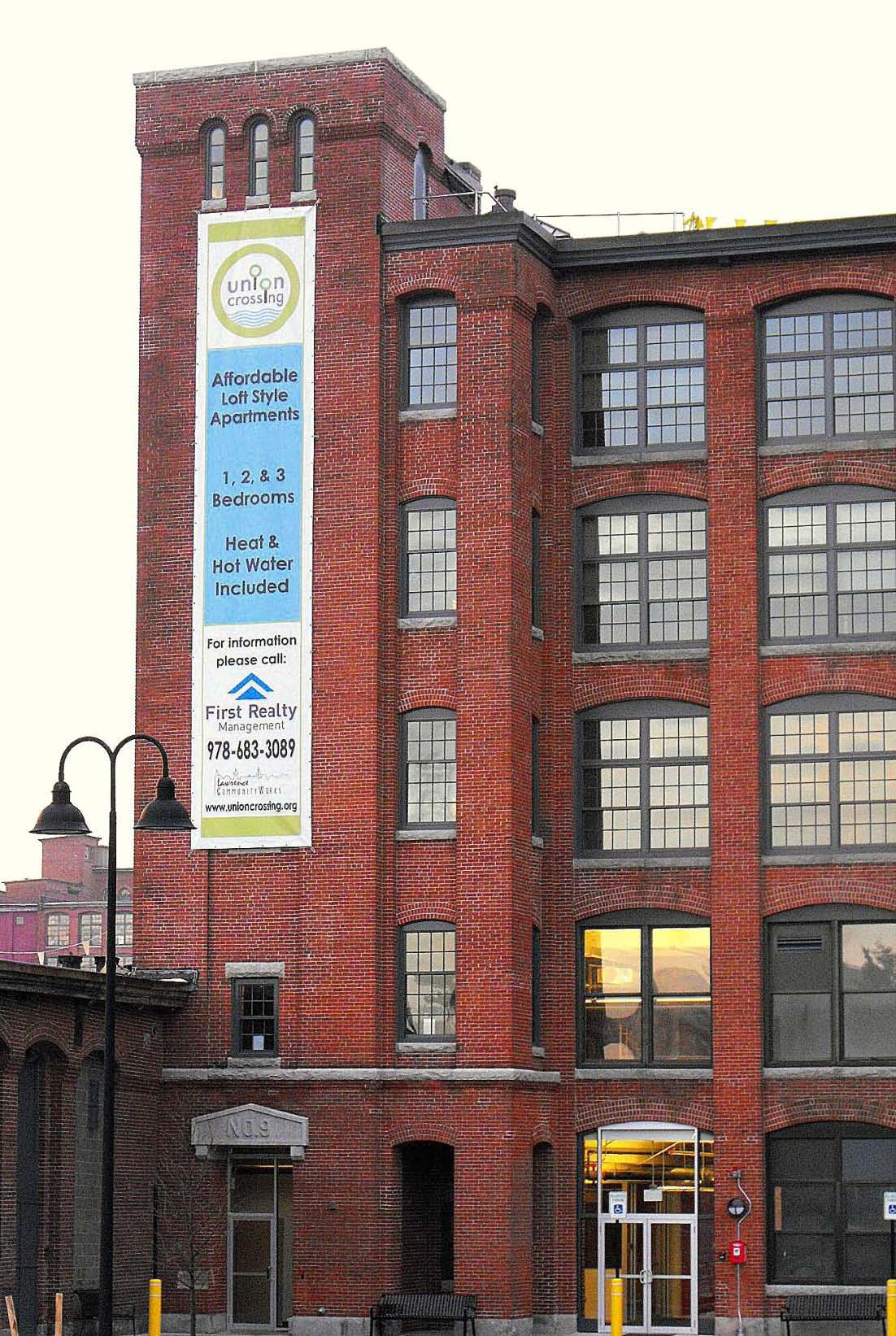 Union Crossing was developed by the nonprofit Lawrence Community Works, which transformed a complex of former textile mills along the Merrimack River in Lawrence, Mass., into a thriving, mixed‐use neighborhood. The project includes a mix of residential and commercial spaces, as well as substantial infrastructure upgrades in the surrounding area. Located on a 5.5 acre riverfront site within walking distance of both the commuter rail station and downtown Lawrence, the redevelopment includes 60 new units of affordable, energy‐efficient family housing, 33,000 sq. ft. of renovated commercial space, a new riverfront playground and community gardens, a new bridge for the North Canal, and improved streetscape amenities. The Union Crossing Project was the most ambitious effort undertaken by the City of Lawrence Community Development Department in over a decade and is truly a model public/private partnership. In keeping with the project goals, some 125‐175 temporary jobs, and up to 225 permanent jobs are being generated. Brownfields contaminants have been abated, and new, environmentally sustainable housing and commercial/retail space have been created. Financing came in the form of an assessment grant from the City of Lawrence of $47,000, MassDevelopment Cleanup Funding of $826,870, a Community Development Action Grant of $2 million, a More Jobs Grant of $1,463,000, Massachusetts Department of Energy Resources (American Recovery and Reinvestment) funds of $550,000, City of Lawrence (HOME and EDI) funds of $1,313,000, the Commonwealth of Massachusetts Funds of $6.3 million, the U.S. Small Business Administration for $200,000, and private partners who invested $31 million. Construction was completed on schedule and the first residential units were ready for occupancy in October 2011. 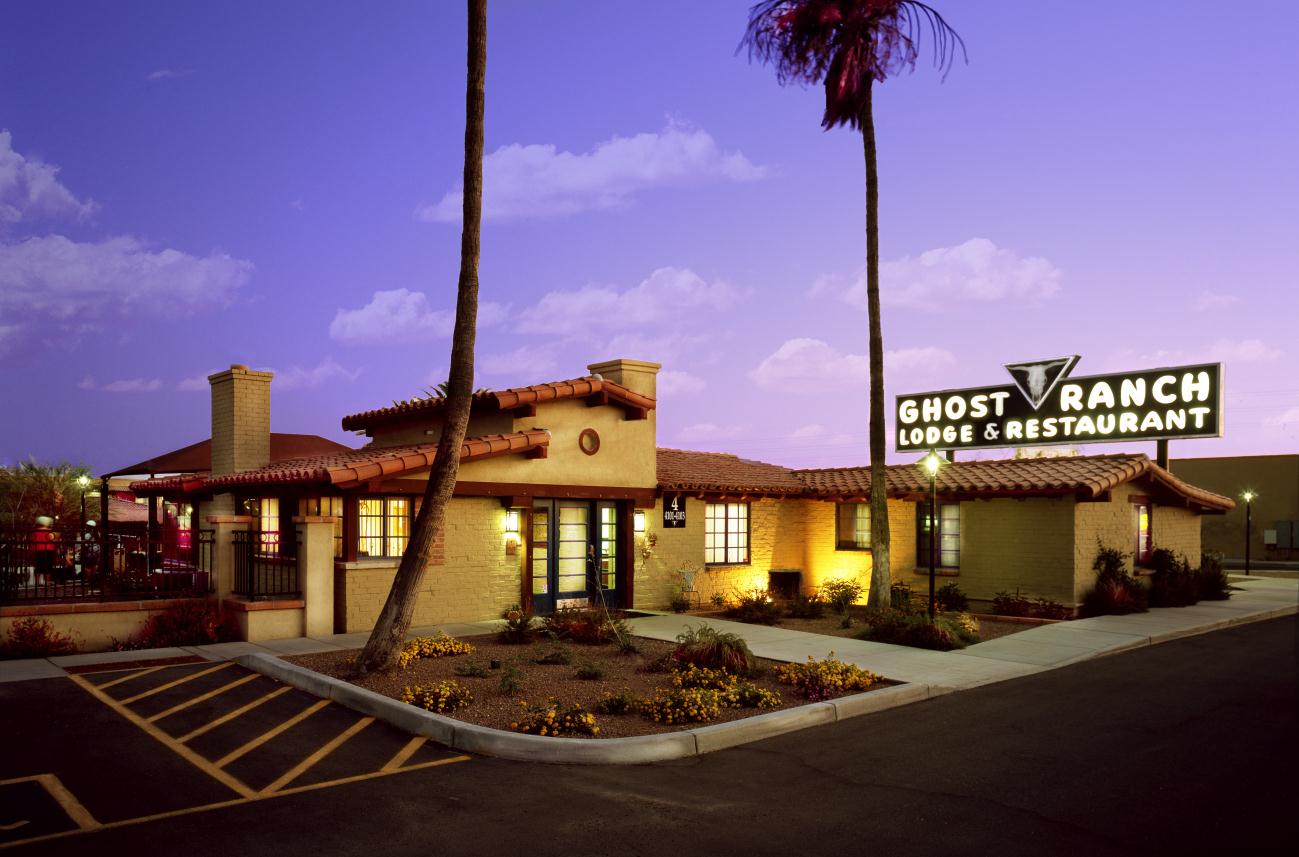 Ghost Ranch Lodge Apartments consists of 7.3 acres of land and contains 20 historic buildings built between 1941 and 1953. Having proudly served the community for well over half a century, Ghost Ranch Lodge had sadly deteriorated into a vacant complex that was in a state of serious dilapidation. On July 12, 2007, Ghost Ranch Lodge was purchased at auction by an affiliate of Atlantic Development and Investments, Inc. Revitalization into much-needed affordable housing for seniors and physically disabled persons was made possible through numerous partnerships within the city, county and state, as well as with service providers, other nonprofits, lenders and others. The City of Tucson and Pima County supported the rehabilitation of Ghost Ranch Lodge and committed $2,357,000 in HOME and CDBG funds. Pima County supported the project with a $1.1 million General Obligation (GO) Bond. Ghost Ranch Lodge also secured $700,000 from the Federal Home Loan Bank; $2,635,429 in Arizona Department of Housing TCAP funds; $25,000 in Solar Tax Credits; and $1,301,545 in Historic tax credits. Atlantic also had a financing commitment for acquisition and construction from National Mortgage Investors, LLC, an equity commitment of $12,929,219 from Credit Capital Corporation, LLC, and a developer loan of $274,477. The rehabilitation of Ghost Ranch Lodge emphasized sustainable design elements, a solar photovoltaic system to offset greater than 75% of the electrical load for the common areas. The rehabilitation of this historic site not only served to preserve an important piece of American architectural history, it also brought the community together as participants in the redesign process. All of its 112 units are rent-restricted units for persons whose income is 60% or less of the area median income.